The Nazi Blitzkrieg (lightning war) created refugees by the millions as it raced across Europe. Jews, because they were Jewish, and any others who ran afoul of the Nazi regime were killed outright or sent by rail to prison camps like Auschwitz to be killed or worked to death. Isolationist America tiptoed around this “European War” until shocked into it by Japan.In 1944, with the tide of the war turning the Allies’ way, President Franklin Roosevelt made a symbolic gesture. His Secretary of the Interior, Harold Ickes, sent Special Assistant Ruth Gruber to Italy to bring back nearly 1,000 war refugees to America. 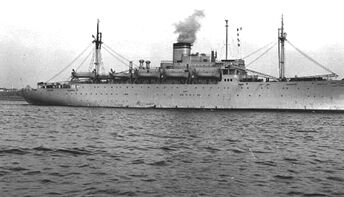 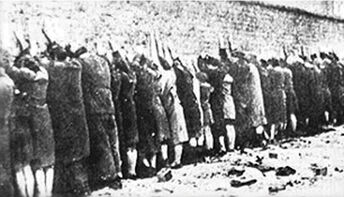 The 982 men, women and children had been specially selected for the trip. Said Gruber, “The government officials making the selection chose families and survivors with skills that could help run a camp in America. The first priority was refugees who had been in concentration camps and escaped.” This small band of 982 had no legal right to be in America – except for President Roosevelt’s invitation. He promised Congress that they would go back home when the war was over. In fact, the refugees had to sign a document to that effect.It took the group two weeks to cross the ocean aboard the USS Henry Gibbins, a troop transport ship, fighting limited space conditions, seasickness, and extreme heat.  It was not a pleasant trip. Refugee Eva Kaufmann Dye remembers, “It was very cramped quarters on the ship. It was made for American soldiers, with bunks that slept two and two and two, which is six stacked on top of each other. The other half of the ship was full of wounded soldiers. It was beastly hot.”But spirits lifted as the ship pulled into New York harbor, and cheers greeted the sight of the Statue of Liberty. Said Ivo Lederer, “If you’re coming from war-time, war-damaged Europe to see this enormous sight, lower Manhattan and the Statue of Liberty –  I don’t think there was a dry eye on deck.”

After that symbol of freedom, however, there were other symbols awaiting them. A train, reminder of the ones bound for Auschwitz and Bergen-Belsen, carried the refugees north to Oswego and a decommissioned military base atFort Ontario. Barbed wire fences and military personnel greeted them at their new home. Refugee Walter Greenberg comments, “I felt deceived. I felt that I should have been free. I mean, I felt wonderful. I had doctors. I had nurses. I had food. I came to school. Oswegonians were very kind… What good is it to have all the amenities of life if one still isn’t free?” The camp gates were not permanently closed. Children left to go to school. Oswego residents passed food through holes in the fence and items such as a bicycle over it. One pair of refugees even got married. They got a license at Oswego City Hall, and the ceremony was performed under a chupa (canopy) on the parade ground at Fort Ontario.

First Lady Eleanor Roosevelt visited the refugees. It wasn’t freedom, but it wasn’t prison, either. And eventually, those who wished managed to remain in America after the war ended.Now, the former residents of America’s only refugee camp for war victims feel an urgency to make sure their story is preserved. Manya Breuer, who was the refugee married at Fort Ontario, explains, “I feel like I was left here, in this world, from the Holocaust, for a reason. I feel this energy that was given to me to fully develop my life here in the United States and live in America as a human being as everybody else. And being left from such a horror is to be like a messenger to let the world know what it is like to have faced a world of hate and prejudice and not letting any other human being live.”

The Safe Haven Holocaust Refugee Shelter Museum, a memorial to suffering and the triumph of the human spirit, was created in the old Administration Building for the refugee shelter at Fort Ontario and dedicated on October 6, 2002.

It needs your help to continue its mission to preserve this unique story. 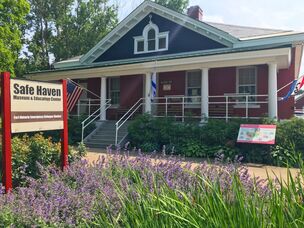 Please contact the museum to make arrangements for a group tour